"THE CONDEMNED gave me the tingle I felt when I read Richard Matheson's I AM LEGEND for the first time. This is a wonderful, forceful, moody book that's as palpable as it's engaging. Pay attention to David Jack Bell. This is the start of an impressive career."

We here at St. Andrews tend to agree.

You can listen to his reading on the web, or if you find yourself lacking in street cred lately, you could always try subscribing to the podcast through iTunes for instant updates. This week, St. Andrews had the pleasure of welcoming home one of her own, Marlon Carey. A 2000 graduate of SAPC, Marlon has been living and working in New England for the last several years. He has served his community as a public school teacher, but opted to enter into a more preventative, hands-on career in at-risk youth outreach. During his time away from his alma mater, Marlon has made quite a name for himself in the poetry slam circuit, and during his visit, he taught a master class on poetry slamming. His innovative and interactive teaching style wowed the nearly forty students in attendance, and his idea to have a mini-slam between professors of Creative Writing was a huge hit. (Ron Bayes won, followed by David Bell and...well, Molly McCaffrey had some points, too.)

At Forum, Marlon recited several of his own poems, asking daring questions of his audience such as, "Why does Nike support terrorism?" in his powerful poem "It Must Be The Shoes." He delighted the crowd with his poem that focuses on alliteration and speed of recitation, a poem he refers to simply as, "P Poem." After his lively performance, we shifted into a different gear, trying our hands at poetry slamming with Marlon's guidance. The guest judges, Dr. Rhoda Ramirez, Dr. Bill McConnell, and Dr. Ted Wojtasik, did a fantastic job and we appreciate their help! Though we aren't able to podcast the slam, please enjoy Marlon's reading.

Catch his reading on the web, or better yet, why don't you go ahead and subscribe to the podcast for instant and automatic updates!
Posted by Fortner Writers' Forum at 6:25 PM No comments:

St. Andrews was pleased to welcome to its campus Lois Siegel, a veritable powerhouse in all things creative. Recognized internationally for her photography, film-making, and music-making, Ms. Siegel has been a tour de force on campus, trekking from Women's Studies classrooms to Advanced Video Production meetings to the theatre and beyond. Aside from making films, playing music and taking photographs, Siegel is a professor at the University of Ottawa. At the Forum tonight, we were privileged to views clips from several of her films on topic ranging from the history of women in baseball to a Canadian family that made a name for itself in film by staging and participating in stunts to the plight of the albinos. In light of being unable to podcast the actual Forum, please check out the interview with Lois Siegel instead--same bat time, same bat channel!

For more information on Lois' films, you can check out her website.

To order a copy of her award-winning documentary Baseball Girls, you can contact the Canadian National Film Board by calling 1-800-542-2164.

As always, you can listen on the web, or, for extra cool points, subscribe to the podcast!
Posted by Fortner Writers' Forum at 4:37 PM No comments: You can listen in on the web or subscribe to the podcast for automatic updates.

Chris opened up the night by reading Marine Life, a short story about a couple's spat over whether or not to have a baby while attending a conference in California.

Senior Andy Reynolds read Theodore Roethke's "Her Becoming" and, since Valentine's Day isn't complete without a bit of Pablo Neruda, "The Song of Despair."

Taking a break from all the lovey-dovey stuff, senior Ed Farrell read a spooky short story that was entirely--okay, mostly--true.

Liz Monish followed that with a reading of Paul Verlaine's "Le ciel est, par-dessus la toit," in French and then in English.

Jeremey Weiss read one of his poems, "America's Duende," penned earlier in the day in Bayes' class, as well as "Quiz, Tests, and Homework," a lament to the last semester of his senior year.

Tabitha Zimmerman read two untitled love poems of her own. (It's cool, because she doesn't need titles.)

Next, senior Cate Johnson read from the fabulously rambling The Life and Opinions of Tristram Shandy, Gentleman.


After a brief intermission, Dr. Rhoda Rameriez, professor of education here at St. Andrews, read from her collection of odd books, the poem "Livin'" and a few definitions of "kiss" from a comic dictionary.

Jacob Lee Robbins Pittman, who's favorite sappy love song may or may not be by Celine Dion, read one of his own, "A Day of Caring."

Senior Alicia Toke reads one of her own, "Salt," and follows it with a little Robert Creeley.

Emily Threlkeld gives a shout out to her first boyfriend, followed by "Settling" and "How Do You Write A Poem for A Guy Who Digs Rimbaud."

Dr. Thomas Heffernan reads a mystery love poem that showed up in his mailbox this morning--quite the scandal--and segues into a little Shakespeare, or as he's known around here, Willy the Shake.

Finally our hostess Margaret Mason Tate closes the night out with the love poem of love poems, by none other than e.e. cummings.
Posted by Fortner Writers' Forum at 5:20 PM No comments: For those of you unacquainted with St. Andrews Presbyterian College, here is a brief and non-inclusive primer on the Brunnenburg program. In 1976, a professor and a small group of students set out for the Sudtirol of Italy, bound for American poet Ezra Pound's estate. The estate, called Brunnenburg (which means "castle of fountains"), sits in a glorious valley in the Tirolean Alps, and it provided a home for that professor (Dr. Dick Prust, FYI) and his small group while they studied Pound's famed work THE CANTOS under the direction of his daughter, Princess Mary de Rachewiltz. Thirty-two years later, St. Andrews is still sending one lucky professor and up to fifteen lucky students to Brunnenburg, where they still study under Mary and her son, Sizzo, and are provided the tremendous opportunity to travel, both individually and as a group, all over Europe. They also do a meager repayment to the de Rachewiltz family by providing manual labor for the fully functional vineyard on site. The students who travel to Brunnenburg take four courses: a class on THE CANTOS with Mary de Rachewiltz, Agro-Archaeology and Saints and Heroes with Sizzo de Rachewiltz, and a course with the chaperoning professor. While Creative Writing and English professors have often been the ones to go on the trip, students have also had the pleasure of studying things as varied as art history and even film. As a Brunnenburger, I went with the head of the St. Andrews Communications Department, and we made a full-length feature film during our stay in Italy! In 2007, a group of St. Andrews' finest assembled in Italy with Ted Wojtasik, a creative writing professor. At the Fortner Writers' Forum tonight, we featured work from those students and proudly turned the gavel to Dr. Wojtasik, the night's gracious guest host.

You can hear tonight's forum on the web or, as always, you can subscribe to the podcast for automatic updates.
Posted by Fortner Writers' Forum at 5:03 PM 1 comment:

The Butcher, The Thief, and the Buyer of Beef

CONGRATULATIONS to the Writers’ Forum cadres and (with thanks) to Mark Mannette and all the theatre dudes for making last night’s Forum the best attended since Robert Creeley last visited campus. I didn’t realize that Orange Main Lounge could hold over l00 people; now I do.

You can hear the reading on the web or better yet, why not subscribe to the podcast?

Thanks so much to the Highland Players:


Here are a few photos we snapped--without flash, unfortunately--during the play: Thanks for a great night, everyone, and we'll see you next week!
Posted by Fortner Writers' Forum at 11:55 AM 1 comment:

The last Forum of January, or, as we say here at St. Andrews, Yahn-ewe-airy, is a very special one indeed. Forum is featuring the Highland Players performing an original short play by Mark Mannette, co-founder of the Playwrights' Round Table as well as the wonderful and innovative professorial addition to the Theatre program! The Butcher, The Thief, and the Buyer of Beef is sure to please everyone, so be sure to make it to Forum this Thursday, January 31.
Posted by Fortner Writers' Forum at 8:13 PM 1 comment: See you next week!
Posted by Fortner Writers' Forum at 9:59 PM No comments: 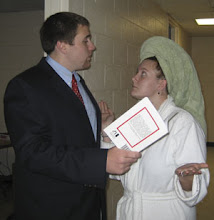